Thank you for helping Keng!

Last year (2018), we did a fundraising campaign for a boy named Keng. It took a bit longer than planned, but last week, we were finally able to give the needed device to Keng. Thank you very much for all of you who have given! Keng and his grandparents are very thankful for your help!

For those of you who don't know the story of Keng: Keng (not his real name) is a 12-year-old boy, who lives with his grandparents in Mukdahan, northeast Thailand. 3 years ago, Keng was hit by a car and was left fully disabled. He is not able to walk, talk, hear of see. Grandfather quit his job to take care of his grandson. Siam-Care regularly visits this family and recently discovered Keng has a big need: a mucus clearance device, to prevent him from choking.

By cleaning the school garden, Keng had made a little money for himself. 3 years ago he went to buy noodles, but was hit by a car while he was walking next to a big road. The driver did not pay enough attention. Keng was severely injured and underwent brain surgery several times and now, 3 years later, he fully depends on his grandparents. He eats through a tube, cannot move and doctors think he lost most of his senses. Keng can also not cough by himself. He is often sick and his grandparents need to use a device to clear his mucus, as he cannot do this by himself.

The problem was: the device that was given to this family by the hospital, needs to be plugged in. But often there is no power in the small village where this family lives, and so they cannot use their device. This can cause life-threatening situations. With your help, Siam-Care has bought a mucus clearance device which uses batteries, which can always be used. Last week, we gave the device to Keng, which you can see in the picture. This family is very poor and was very thankful that Siam-Care bought them this device. 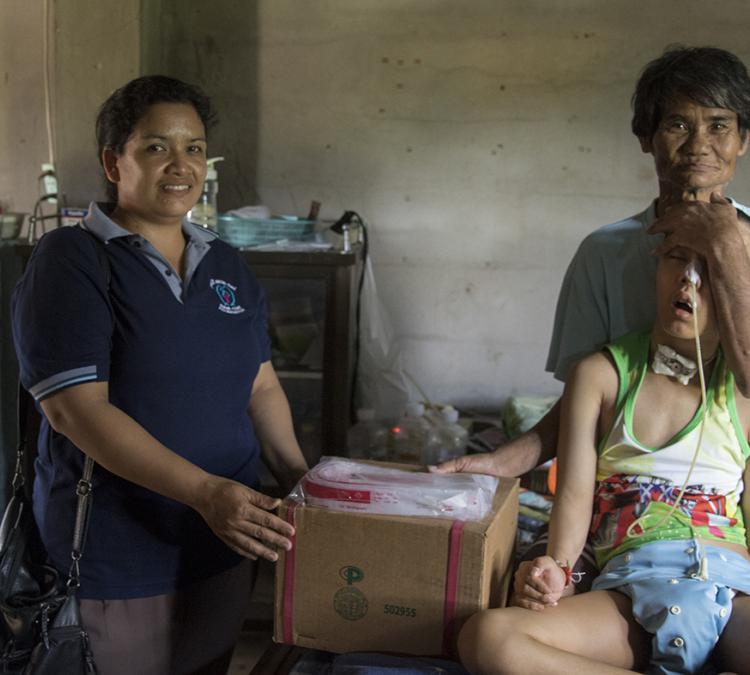