A bed for grandmother

Fluke's (2013) grandmother was recently diagnosed with cancer, while she was HIV-infected already. She didn't even had a bed to sleep on. This had to change and so Siam-Care helped out. This is the tough story of one of the families we look after.

No support from parents

Fluke’s grandparents now take care of Fluke. Fluke’s father never contacts his son and does not support him financially. Father’s brother promised to support Fluke with 1000 Thai Baht a month, but has never sent any money. Mother does not have a steady income. So far, she did not make enough to send back money to her son. Fluke’s grandparents sometimes travel to Phuket to sell vegetables, so Fluke sometimes sees his mother.

Fluke’s grandmother has been HIV-infected for a long time already, which is hard enough in itself. It’s not just the physical issues, but also the stigma involved which make life tough for infected people. But a little while ago, things for worse for grandmother. She was diagnosed with cancer and had to undergo surgery. She hasn’t been able to work since and feels very weak physically.

Sleep in the mud and dirt

The family lives in a small house, only 12 square meters, with 7 people. They don’t have a kitchen and only a very small bathroom/toilet. Grandmother had to lay on the floor, which is often dirty and muddy. Not a situation you’d want anyone having to sleep in, let alone an old and sick woman. And so Siam-Care decided to buy a bed for grandmother. It’s just a little thing to do, but with a big impact on grandmother’s life, as she spends most of her time in bed.

How do we support?

Furthermore, we have been supporting Fluke’s education for a few years now. Grandfather had a motorbike accident and struggles to find a job because of a leg injury. Both grandparents want Fluke to study and have enough to eat, so they work hard, despite their physical situation. Fluke is a cheerful and talkative boy. He likes to play with his relatives and studies in the second year of primary school. 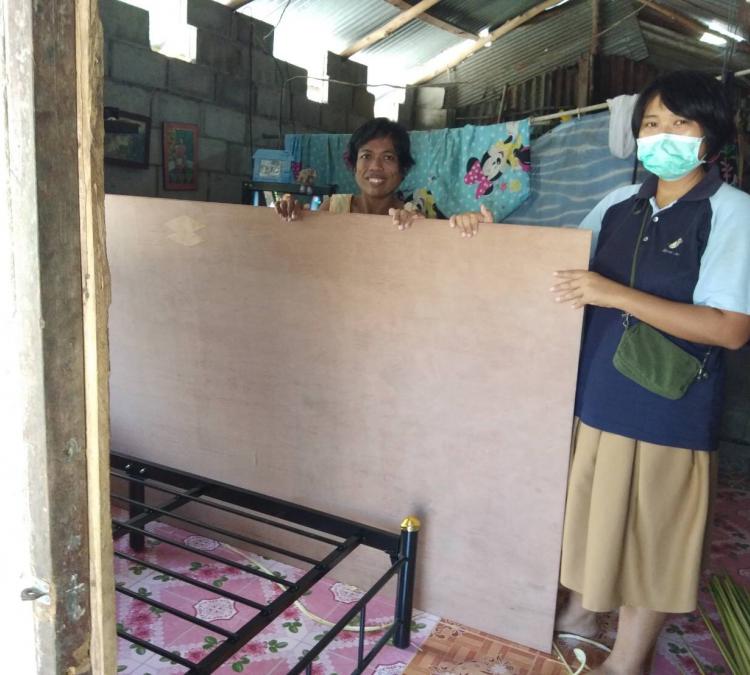