‘My son has cancer and my daughter died last year’

Som is a 43-year-old mother, who lost her 20-year-old daughter Ung in the beginning of this 2019. As if this wasn’t enough, Som’s younger son Base was recently diagnosed with cancer. And their insurance, refuses to cover his much-needed surgery. This is Som’s touching story.

In 2018 we shared a picture on our social media of a girl named Ung. She had just finished her studies, with the support of Siam-Care. We were proud of this achievement and so was Ung. She was full of dreams and excited about her future. Only a couple months later, Ung passed away at the age of 20. She lived together with her 2 younger siblings. One of them was still a baby (Mon) and Ung looked after her, so that mother could work. Ung’s passing away now means that mother cannot work and hence hardly has an income.

Father is not around

The husband of Som, who is also the father of all 3 children, works and lives somewhere else. They are officially still in a relationship, but he doesn’t support his family financially and hardly ever visits. Hence Som struggles a lot to make ends meet. She cannot work and her children are too young to work. Som obviously has a lot on her plate, and unfortunately, a couple months ago, she got more bad news.

Her son Base was not feeling well, so they visited the doctor for a check-up. Expecting to hear there was not much going on, the doctor told them that Base has cancer and quickly needed surgery. And even worse: this hospital couldn’t perform the much-needed surgery, as they ‘didn’t have time’. They sent Base to another hospital, but their insurance refused to cover surgery there. They didn’t have the money for surgery themselves, as the cost was more than what mother makes in 2 years. Doing nothing wasn’t an option, because the cancer would have surely killed Base within a year.

Siam-Care staff felt very sorry for Som and her family, obviously. We also felt frustrated, as both their local hospital and their insurance were not going to come up with a solution. Siam-Care contacted some people in our network, and thankfully, we found 2 people who wanted to cover all medical costs. In October Base underwent surgery. Afterwards he heard that the cancer had spread to other places in his body and he needs to undergo more treatment. His battle isn’t over yet and it is sad to see a young boy suffer this much. It is a very tough time for this family.

For the time being, Som, Base and his young Sister Mon, stay at our office in Bangkok. Their own house is not safe and also far away from the hospital in Bangkok. Base has a very low resistance due to his treatment and cannot be among other people for too long. Thankfully we have a spare bedroom for this family. We wish we could heal Base, but unfortunately, we cannot. All we can do, is help cover medical costs and offer a shoulder to cry on. Will you stand with us and please pray for this family? They surely have a lot to deal with. 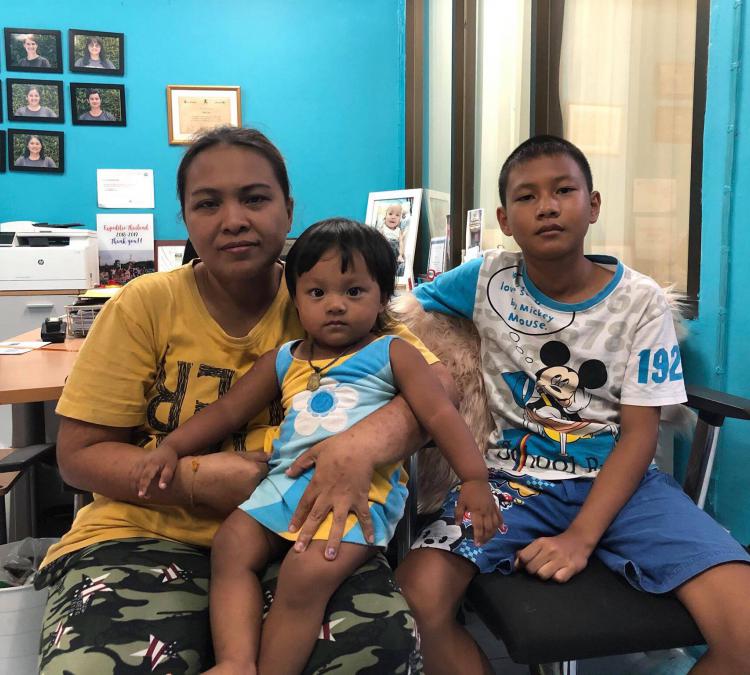